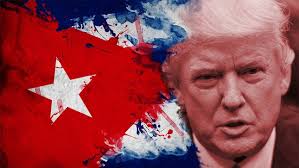 The year started off with new meaning, The Trump administration has added an interesting way of telling the Cuban regime to cease its criminal activities in Venezuela.  Basically, stop with the suppression, killings, drug trafficking, and money laundering.  Is the Cuban regime listening?  Maybe not, they continue to jail interrogate human rights activist Jose Daniel Ferre and countless of dissidents.  They decided to murder Armando Sosa Fortuny, the political prisoner that was tortured for more than 43 years in Cuban prisons.  The Cuban regime is also not allowing peaceful activists to leave Cuba for political events, meanwhile blaming the Trump administration for all of its problems.

There is hope. President Trump’s message has always been America First. He looks at every policy as to how it benefits the US.  The US voter must urge him to deal with the Cuban regime in a hard and forceful way. Swift actions could save thousands of American lives each year. Cuba is the heart and soul of the drug trade.  Reportedly, 90% of the drugs that enter the US via Mexico, but It all starts Bolivia. Where the coca leaves are grown and then tracks northward towards Venezuela. The Venezuelan Maduro regime is only a puppet, taking orders from his handlers in Havana.

President Trump could bring down gun violence in our poorest neighborhoods, like the southside of Chicago. The Cuban regime is directly affecting the lives of most Afro-American communities. How could this be possible? The coca leaves are not grown on the US ghettos streets but have made its way to all parts of the US. This mainly accrues because of the support and logistics given by the Cuban regime. The south side of Chicago has countless murders every weekend. The kids are fighting a drug war between gangs. All in the name of illegal narcotics. Meanwhile, the Havana drug lords sit back and watch. Something must be done.

I wonder if President Obama ever mentioned this to Raul Castro during the baseball game they attended together, I doubt it.  It seems they were too busy watching baseball. Most Cubans citizens would rather watch a concert of Willie Chirino singing their favorite song: